Chapter 12: The World Meteorological Organization (WMO): Something in the air

Meteorology is forward-looking by nature. Its time horizon is the next hour, the next day, a week, a month, or even several years from now – in a word, the future. The tyranny of the future gives meteorologists a knack for sensing which direction the wind is blowing.

The building they commissioned in Geneva in 1999, for the World Meteorological Organization (WMO), is their futurist manifesto. Its shape, colours, and materials create an air of fragility that echoes the precarious state of our physical world. Its energy efficiency shows concern for our dwindling natural resources. Its elegance comes from its simplicity. The architects entitled their project “Chic Planet”.

The name may have been chosen to rebuke the austerity of the WMO's former headquarters in Geneva. Inaugurated in 1960 on avenue Giuseppe Motta, it was “rational to the point of caricature”, according to critics, who decried its emphasis on functional aspects over its representational role (1). The building is unrecognizable today. It was designed by the modernist architect Ernest Martin and commissioned by the Canton of Geneva for the WMO, which had relocated from Lausanne in 1951 and been housed in prefab buildings on the avenue de la Paix ever since. Martin’s creation followed the style envisioned by the urban architect André Gutton in his plan for the Place des Nations. It soon proved too small, however, even with the addition of a second, equally unremarkable structure. As further extension was impossible, the WMO asked for – and obtained – a replacement in 1990. Geneva offered a plot on the avenue de la Paix, and Bern arranged financing.

The Federal Council had no trouble convincing Parliament to open its wallet. Working conditions in the old building had become abysmal: files were piled high in hallways, meeting rooms had been turned into offices, and communal areas were fast disappearing. The Swiss government provided an interest-free 79 million franc loan. With an additional 26 million francs from the sale of its building (purchased by the World Intellectual Property Organization with the help of a 3% loan from the federal authorities), the WMO had the 105 million francs it needed for its new headquarters (2). 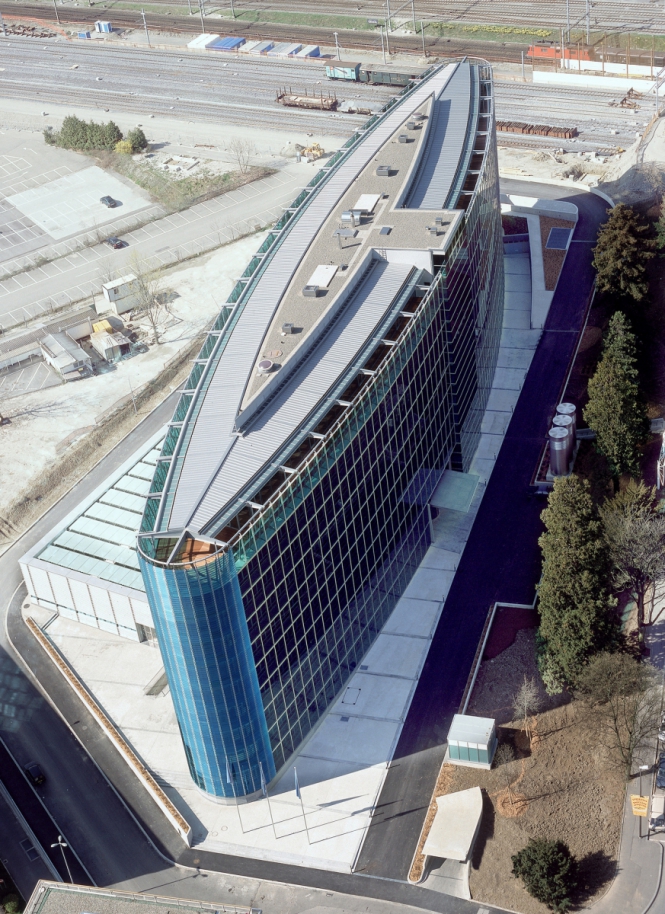 A charming idea on a thankless plot
© WMO

Switzerland was pleased with the evolution of the WMO, which had originated in 1873 as an international initiative of meteorologists – the same year that a physical explanation for rain was first suggested. The organization’s small permanent secretariat, established in the Netherlands in 1928, relocated to Lausanne in 1939 after it was forced to shut down following the German occupation – weather forecasting was vital for military operations. In 1947, the Member States decided that the secretariat should join the UN’s other technical organizations in Geneva. Later, the launch of the first satellites and the invention of the supercomputer stimulated the development of weather science, resulting in the birth of the World Weather Watch in 1964.

The WMO thus stood at the centre of a network of research initiatives that played an increasingly central role in political decision-making. From the mid-1980s, climate change moved from an issue debated only by experts to front-page news. The alarm had sounded for the world’s air, water, and rising temperatures. Monitoring was organized. The WMO was responsible for providing risk indices. To do so, it needed more space.

In 1992, the WMO announced an international architectural competition by invitation. The brief presented a challenge. The WMO’s new headquarters had to remain up-to-date and adaptable for at least 20 years; it needed the capacity to grow internally. It also had to adapt to individual and cooperative working styles without expensive refits. And, especially, it needed to minimize its environmental impact without sacrificing the comfort of its users. 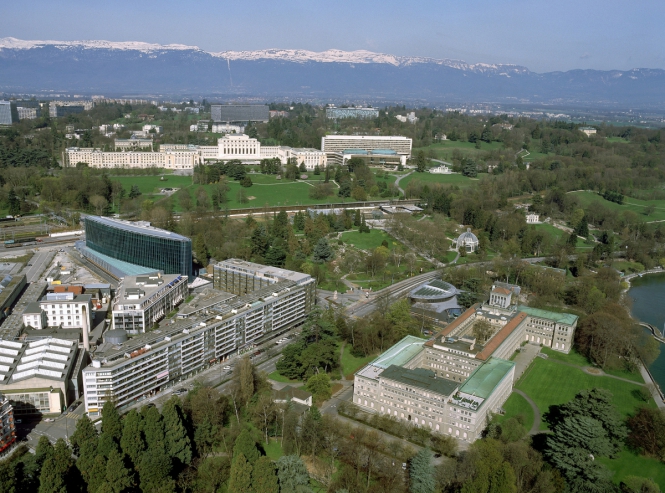 With WTO to the East and the Palais des Nations to the West, WMO marks the Northern limit of the Genevan urban fabric
© WMO

The winning design was the brainchild of two Genevan architects: Rino Brodbeck and Jacques Roulet, former students of the late Jean-Marc Lamunière, who similarly advocated simplicity. Visually, their building is simple: a 120-metre-long oval extending from east to west and connecting the Palais des Nations with the William Rappard Centre by the lake, which marks the city limits to the north. It is bordered by two low buildings, containing a conference room and a library on the south side, and a five-storey underground garage on the north. The long, narrow plot dictated the building's ellipsoidal shape.

But on observing the surrounding office buildings – large rectangular blocks in which they themselves would not have wanted to work – the architects had another aim in mind. “Seven hundred workstations equals 1,680,000 hours of work per year,” they said. “Doesn't that warrant some concessions to cultural and social change?” (3).

Instead of “depressing office corridors” (4), the architects opted for workspaces “whose shape creates momentum”, and which support “concentration and creativity” and enable “individuals to thrive”, an aspiration of “modern and democratic society” (5). 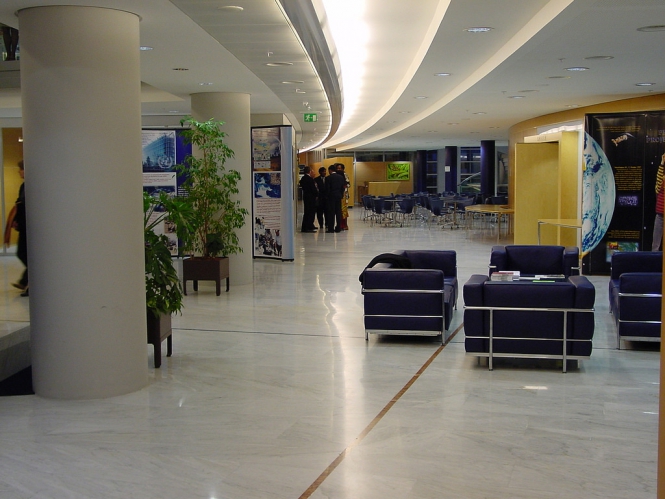 Curves: the intimacy of the circle
© WMO

The definition of well-being at work had changed over the course of the 20th century: hierarchical and physical barriers gave way to openness, transparency, organizational mobility, and the free movement of people and information. Hence the choice of an oval rather than a rectangle, and curves rather than straight lines and angles. With no end and no beginning, the curve marks a moment in the journey; it does not enclose. Offices sit next to the façades and open onto a shared space in the building's centre, which serves as a communal meeting area. Thanks to the curved corridors, the succession of offices no longer appears as a dreary sequence of doorways; it thus acquires a certain urbanity, as if the oval conveyed some of the intimacy of the circle. 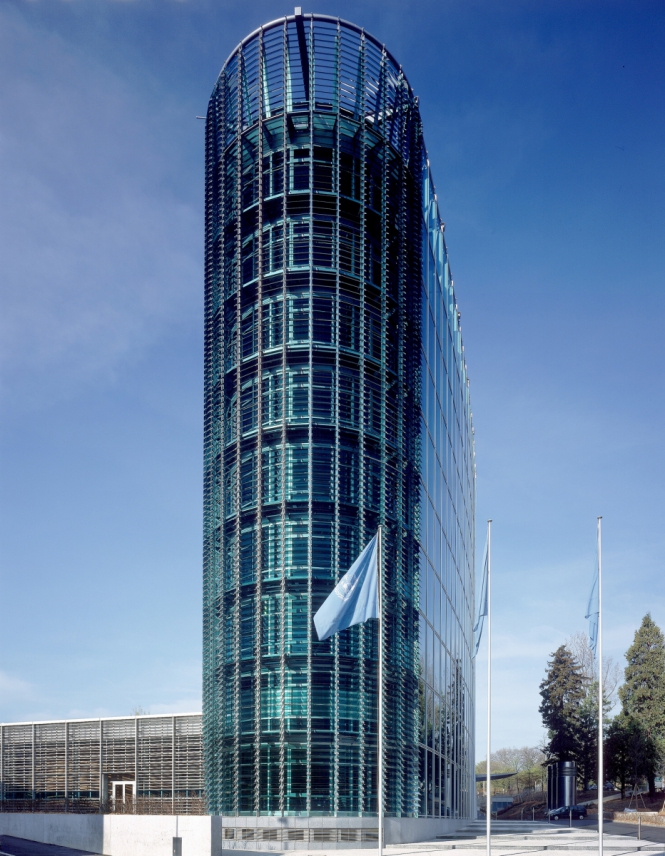 A tribute to slenderness
© WMO

The building rises eight storeys above the ground floor, its slimness disguising its true mass. Both inside and out, it appears as light as a breeze. This impression comes mainly from the glass envelope, punctuated by narrow vertical lines of steel, and from its colour, mirroring that of the sky. Is it blue or green? The WMO's Executive Council was divided on the choice of a colour, a cultural disagreement to which the architects offered an aesthetically pleasing solution by combining a layer of blue glass and a layer of green (6).

Innovative construction techniques add to the building’s sense of weightlessness. The structure rests on 38 external pillars made of steel and eight central pillars of reinforced concrete, while the reinforced concrete walls of the utility areas in-between ensure its general stability. The hollow pillars serve as ducts for the ventilation system, which is almost entirely hidden within the vertical and horizontal load-bearing structures. This design frees up space, removing the need for false ceilings and floors. 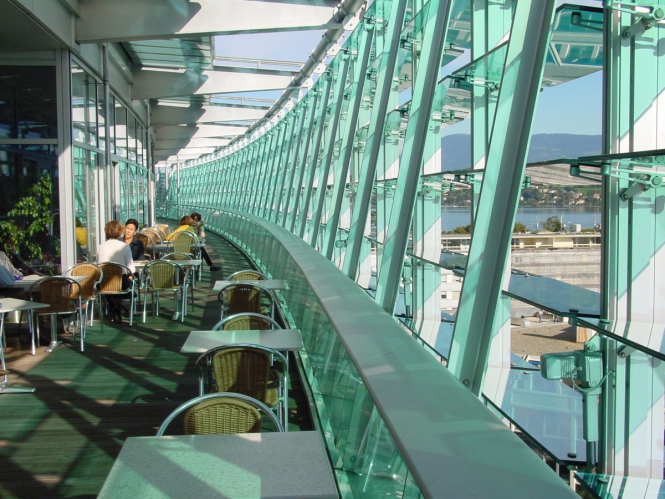 The corridor, on the South side, between the two skins
© WMO

The crowning glory of the WMO building’s “aero-architecture” is its energy system (7). To cool and heat a north/south-facing glass building, the engineering firm ERTE designed an insulating second skin that works like a thermos: on the north side, the fixed outer layer of glass acts as a shield against the cold winter wind; on the south side, it consists of horizontal glass panels that open and close depending on the temperature. A gap wide enough to counteract the “greenhouse effect” separates the two skins. 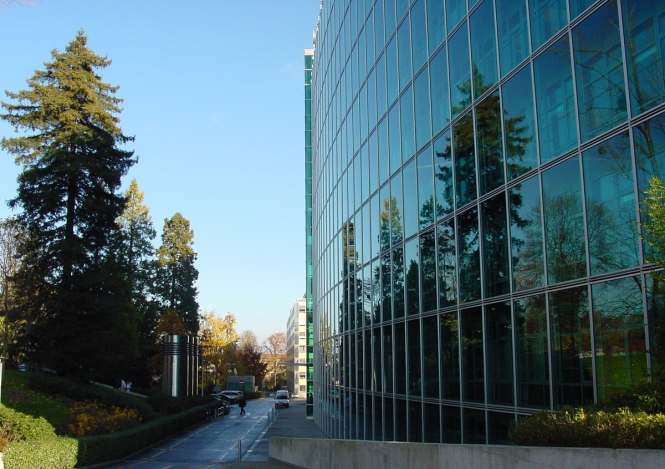 The northern façade, a shield against the "Bise" wind
© WMO

In addition, a ground-coupled heat exchanger buried in the thick foundations of the underground garage pre-heats and pre-cools the entire building by extracting energy from the temperature difference between the basement and the soil underneath. In summer, 10 million cubic meters of air circulate through the building at night, removing roughly 3 to 4 degrees of heat accumulated during the day. The thermal mass cools in the basement overnight, creating the cold needed for the next day. The system operates in reverse during the cooler months. In winter, it is supplemented by two gas furnaces and by heat extracted from exhaust air. A weather station on the roof controls the internal temperature. The lighting system, which includes motion sensors, adjusts to available daylight.

This energy system was state-of-the-art when it was unveiled in 1999, and has since been further developed and perfected, largely based on the WMO's experience using it. The media and public praised the architects' efforts to create a building as intelligent as it was attractive. In the words of the artist Yves Klein, “Air is the only material we inhabit” (8). 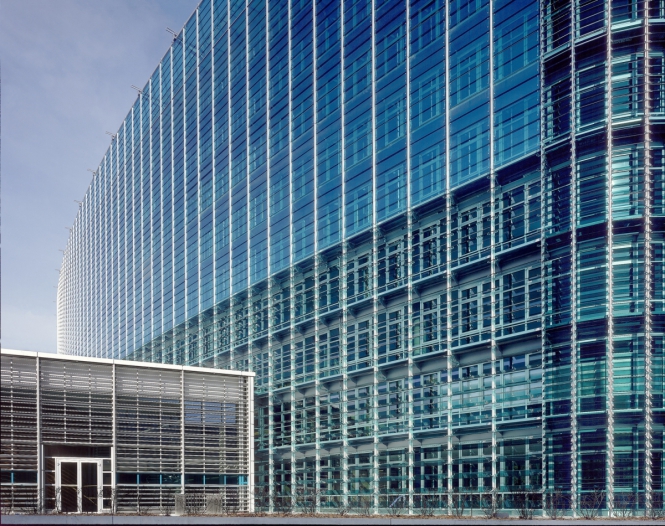 A detail of the façade
© WMO

But to be considered a material, air first had to be made visible, measured, and analyzed. It took meteorologists to fully objectify it, and the architectural historian Cyrille Simonnet to write its first biography: “Brève histoire de l’air” (A Brief History of Air) (9).

In the WMO cafeteria, on the building’s top floor, diners inhabit “natural” air produced by “clean” machines – pure, soft, protected air – while clouds sail by all around. To sit in this space, surrounded by meteorologists forecasting catastrophes, is to happily experience “the human establishment as a pure atmosphere from which walls have disappeared ” (10). 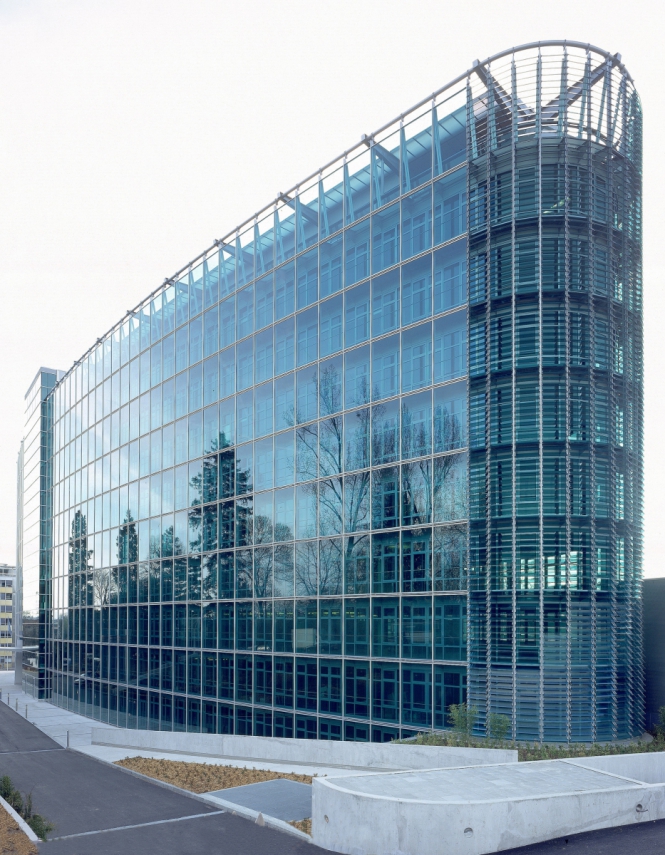 An avant-garde building, that all, immediately liked
© WMO

Page navigator
View next
Chapter 13: The Maison de la Paix, or the Art of Rounding the Angles
View previous
Chapter 11: The WIPO building: The many eras of contemporary architecture