Chapter 10: The ICRC: An architecture of emergency

It may seem strange to devote a chapter of a book about the architectural history of Geneva's international quarter to the buildings of the International Committee of the Red Cross (ICRC) — given the absence of architecture they represent. However, this absence itself is symptomatic of the ICRC’s moral dimension. One would expect that the world’s largest humanitarian organization could exist only in modest, even temporary quarters, since its mission is rooted in the ideal of a world without war.

The UN’s so-called technical organizations in Geneva – for health, weather, telecommunications, and so on – are expected to grow. Their buildings represent a positive, long-term mission. Conversely, the ICRC’s long-term objective — to relieve suffering by enforcing rules to that end — strives for a world that no longer needs it. The world’s ever-growing ills may demand more office space, but that is no reason to lose hope that they will someday decrease, or perhaps even disappear.

The ICRC therefore can never aspire to an architectural monument. The unused Carlton hotel donated by the canton of Geneva in 1946, whose world-famous outline is emblazoned on the ICRC letterhead, symbolizes the success of this indifference to architecture. Annexes have been added to the complex somewhat haphazardly over the years, as the need arose. Thus, the evolving state of the world, and the services it required, largely determined the configuration of the heterogeneous campus where the organization manages its global activities.

By confirming the ICRC’s importance, the First World War was a significant factor in the choice of Geneva as the League of Nations headquarters (1). The Second World War reaffirmed it: the ICRC employed 3,500 volunteers at the Central Agency for Prisoners of War (of which there were 7 million), dispatched 175 delegates to visit civilian internment camps, and sent 30 million packages. But once peace was restored, what purpose might an institution so closely linked to war serve? If the nations of the world could organize to avoid human disasters, was the ICRC fated to disappear? The question was asked. 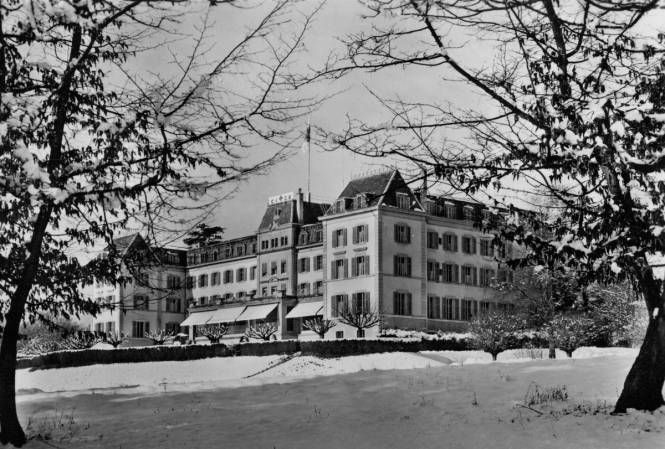 The ICRC would still play a vital role as the custodian of the Geneva Conventions and the creator and sponsor of humanitarian law. As such, Geneva installed the organization in the Carlton hotel and provided a 99-year lease on the adjoining 29,000 m2 plot. Built in 1876 by Charles Boissonas, the neo-classical building was empty at the time. It was also conveniently located on the hill above the Palace of Nations. The move enabled the Hotel Métropole, the ICRC's command post during the war years, to regain its original function.

The faded pile on the hillside in Pregny was large enough to accommodate the 300 ICRC employees remaining after the war, most of whom were nearing the age of 70. Staff numbers dwindled, reaching a low of 159 in 1967. For more than 20 years, the ICRC shrank and aged, mainly occupied with updating humanitarian law and the services of the Central Agency for Prisoners of War.

Yet from 1963, as the ICRC turned 100, a series of new regional conflicts demanded its involvement: Yemen, Israel/Arab states, Nigeria, Biafra, Bangladesh, Angola, Lebanon, Cambodia, Vietnam, Iran/Iraq, and the former Yugoslavia. Wars have not ceased since then, and the ICRC has hired progressively more staff. There were 386 full-time employees at headquarters in 1980, and 664 in 1990; today there are 1,000 out of a worldwide total of 15,000. Management, administration, logistics, training, and archives have filled every inch of a series of spartan structures erected in a hurry on the Pregny plot or rented elsewhere as needed. The ICRC’s success is inversely proportional to that of world peace.

In chronological order, these annexes have included: a temporary structure built in 1978 and demolished in 1992; a seven-storey office block for the administration and archives of the Central Agency (1984); a kind of chalet housing offices and several pre-fabs for special interventions (1985); an office building (1987); a technical building (1992); and two more office buildings (1995 and 2005), the latter combined with a vertical extension of the technical building. In 2009, a rotunda was added to the archives building to give a touch of class to the visitor reception facing the Carlton’s formal entrance, reserved for high-ranking guests. 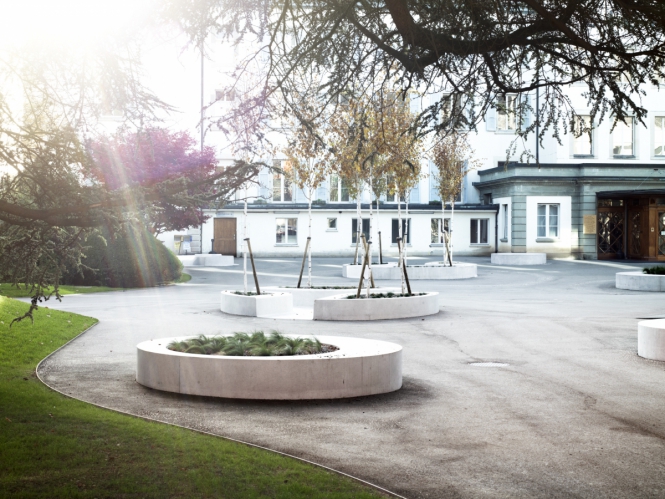 This economical assortment of buildings — which the local architectural firm Group8 has tied together through landscape design — reflects the quiet austerity of an organization rooted in Geneva’s Calvinist culture. The various architects involved – Honegger, Muller, Anderegg-Rinaldi, and Mario Borges – were chosen by the ICRC, with the support the national or cantonal funding authorities, through a competitive process. They recognized the ICRC’s missionary spirit; their work reflects the specifics of the site and the humility of its objective. Still, Borges, who designed the archives and the Agency building, recalled his disappointment when the carpet he proposed was rejected as “an unseemly luxury in a time of shortage”. The comment reveals an architect frustrated with his client’s stubborn puritanism (2).

Yet a shift has occurred in recent years. The vague, distant prospect that world peace might make the ICRC redundant has been replaced by the opposite belief: that given the current state of the world, the ICRC is here to last, and should plan accordingly. While strengthening its presence in conflict zones, and moving some functions to countries where they can be performed more cheaply, the organization has redefined its Geneva headquarters as the policy and strategic hub of what is clearly a long-term mission.

The conditions under which the ICRC operates have also changed. It may be the world's largest humanitarian organization, but nowadays it is by no means the only one. Organizations supporting the victims of human disasters compete for funding; donors can pick and choose. Generosity is a market like any other, in which visibility is an asset and the ICRC's legendary discretion a liability. The generation at the helm in Geneva today knows this; the ICRC is an increasingly active participant in the new communications culture and an eager contestant in the race. It now dares to build for representational purposes. 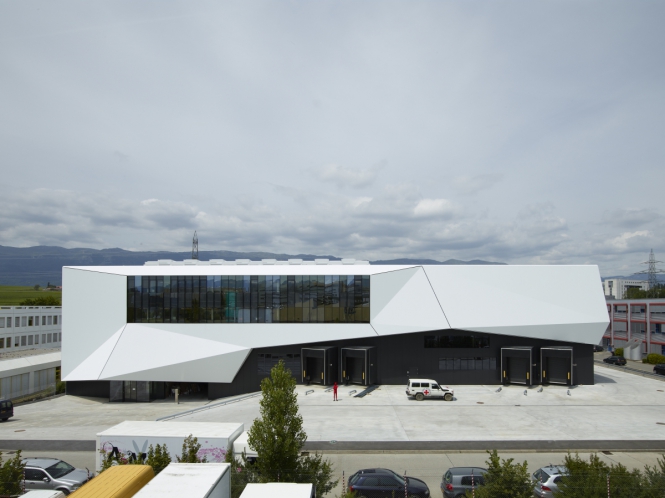 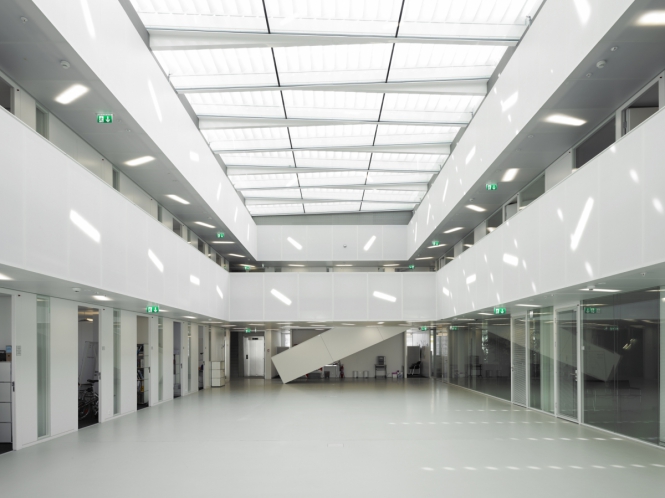 Its new logistics centre in the Meyrin-Satigny industrial zone, unveiled in 2011, is a deliberately bold architectural statement. With its angular lines, square footprint symbolizing neutrality, and unusual materials — such as white canvas covering the walls, alluding to refugee tents — it stands out in the surrounding industrial landscape. Imagined and built by Group8, the winners of the competition organized by the ICRC, the structure reminds us that medication and equipment for victims of conflict and disaster around the world depart daily from the nearby Geneva airport. This humanitarian landmark was made possible by the joint efforts of the canton of Geneva and the Swiss government, who respectively provided the land and a 50-year interest-free loan of 26 million francs, approved by Parliament and managed by FIPOI, an active member of the building committee. Geneva and Switzerland agreed on the importance of showcasing the ICRC as a major player in the international system. 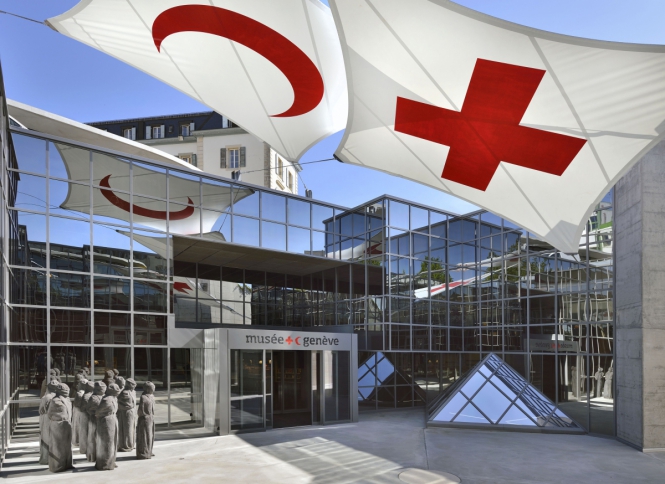 In addition, the ICRC Museum contributes greatly to the image of the Red Cross – again, without ostentation. Eighty projects were entered in the museum’s architectural competition in 1979. The founders, led by Laurent Marti, ultimately chose not the first prize but the sixth, which they considered the least theatrical: it proposed burying the museum under the hill where the Carlton stands. The decision caused a small scandal in the architectural world. While acknowledging the clients’ right to choose according to their taste, architects lamented that, after a successful public presentation of the 80 projects and the high expectations it raised, the ICRC had opted for invisibility. ”Burying the Red Cross Museum was a bit like burying the competition, and all our efforts to draw architecture out of hiding,” the architect and urban planner Richard Quincerot remarked (3).

The sixth runners-up, Pierre Zoelly and Georges-Jacques Haefli, were known for their Museum of Watchmaking in La-Chaux-de-Fonds, built in 1972–74, which they described as the “first complete exercise in contemporary troglodyte architecture in Europe”. It was an appealing example. An underground museum would not compete visually with the Carlton, and also symbolized the ICRC's discretion and commitment to in-depth action.

Zoelly included several symbolic elements in the building, such as the trench leading to the atrium (the First World War); the raw concrete (stark reality), a gift from Mikhail Gorbachev delivered from the USSR by truck; and the symbols of the Red Cross and Red Crescent only partly covering the atrium, signifying the impossibility of total protection. 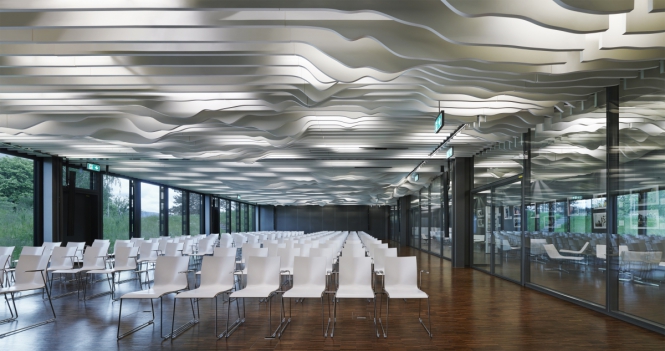 Inside the Humanitarium
© Walter Mair / group8

The 30 million-franc building was funded entirely by private donations. Inaugurated in October 1988, it quickly found its audience. The independent foundation that has managed the facility from the start opted to mark its 25th anniversary by modernizing and expanding it. Together with the ICRC, the foundation outlined a proposal that would meet both institutions’ needs. The winners of the architectural competition were the talented Group8 practice. Leaving the basic principle of a buried structure unchanged, they chose to dig farther under the hill, adding three levels: a conference room for the ICRC, known as the Humanitarium, on the first; offices for the museum on the second; and a new exhibition space deep underground. They juxtaposed the mineral element of the original structure’s concrete walls with the warm, comforting organic element of wood. Windows set deep in the hillside, almost invisible from the outside, offer a full view of Mont Blanc from within the Humanitarium and offices. 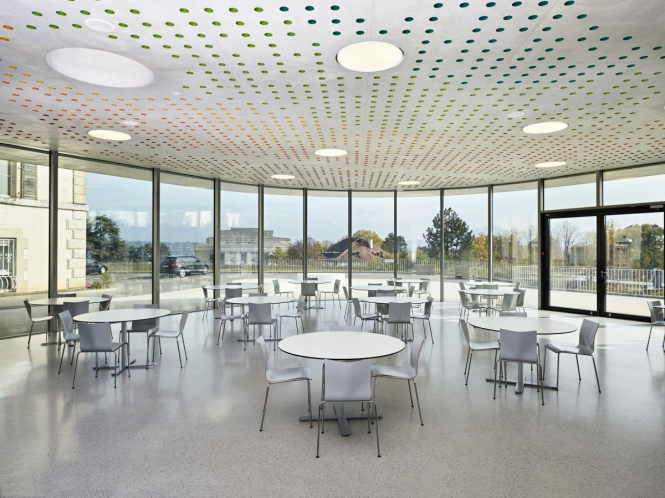 The architects also designed a 300-seat cafeteria above the museum, serving both ICRC staff and visitors. Transparent and light, the curvilinear structure extends out to an elegant terrace poised between sky and lake, a consoling counterpoint to the catacombs of suffering below. A cedar emerges from its midst, a tree of life in the midst of death. As Hegel said long ago, architecture is art only when it becomes language.